Using the Government’s own NOABLS model of average wind speed for a height of 45 meters,  shows that from a performance perspective, the the Wrey’s Barton turbine is located in a very poor area.

We have overlaid the speed info onto a map of West Devon. Anything below 6 meters / second is considered unsuitable for a wind turbine. 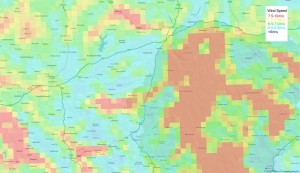 Trying to think like a planner and accepting that wind turbines actually have some benefit ,  wouldn’t it better for the county to position a smaller number of turbines in a better performing area rather than down in a valley?

This entry was posted in Planning, Weird and tagged Map, Planning, Wind speed. Bookmark the permalink.

This site uses Akismet to reduce spam. Learn how your comment data is processed.